Can I Use a Computer During a Storm? 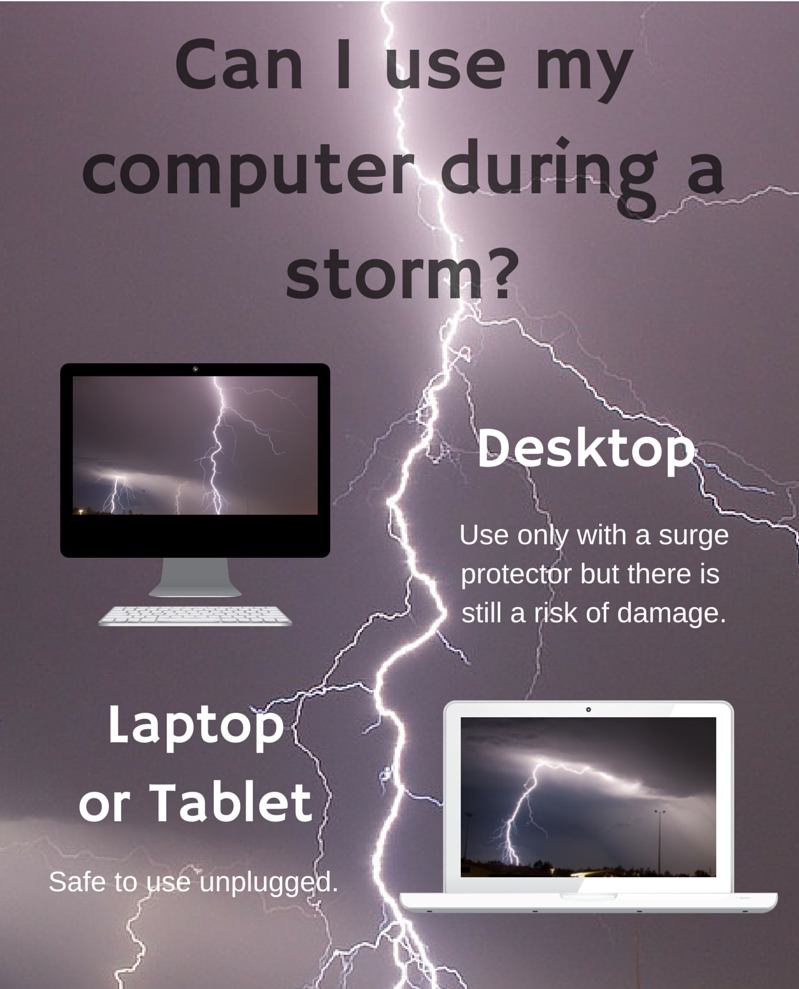 03 Dec Can I Use a Computer During a Storm?

Is it safe to use a computer during a storm? If you’re been wondering the answer to this question, here’s the comprehensive answer. It depends on what type of computer and how you’re using it.

The problem with computers and storms is lightning. Lightning carries a huge amount of electricity and if that electricity makes it into your body or electronic equipment it can do serious damage. In this article I’ll dispel some of the myths and give you the most accurate answer I can about whether or not you can use your computer during a storm.

Can I use a Desktop Computer during a storm?

Unless you have very good surge protection equipment you should turn off and disconnect your Desktop PC from power, LAN and phone lines during a storm. Even with surge protectors it is still possible that your computer may be damaged. However if you have a good surge protector, particularly one that comes with a good connected equipment warranty it may be safe to leave it connected.

Why is there still a risk with a surge protector? Lightning travels across kilometres of clear air! If you get a direct strike to your house or very close, a tiny surge protector is not going to stop it. In some cases even devices not plugged in have been damaged by induction from a direct lightning strike.

Can you get shocked via your Desktop Computer? The components of your computer you are likely to be touching are all plastic, so a shock is very unlikely. However if you are wearing headphones you could be at risk of either acoustic shock(loud noise produced from the earphones) or electric shock because the headphones put electrical components close to your head. Best to avoid headsets during storms.

Can I use a Laptop Computer during a storm?

Laptop computers are safe to use during a storm, however there are a few provisos to that. Firstly, disconnect your laptop from power. If you’re running from battery you’ll be safe. If you were connected to a power point you run the same risk as a Desktop Computer has during a storm.

Secondly, make sure that you don’t have any other cable connections to anywhere. For instance phone or LAN cables should be disconnected. Provided you’re running entirely wirelessly you’ll be safe.

One last thing to think about with Laptops. If you’re running on Wifi to access your internet connection, your Wifi Modem or Router is at risk because it’s usually plugged into both a phone line and a power point. The same electrical surges that affect  your computer can fry your modem. Now a modem is usually a lot less expensive to replace than a computer, but it’s still a risk. The number one reason for dead ADSL modems is lightning. Lightning will also do a pretty good job of frying ADSL line filters.